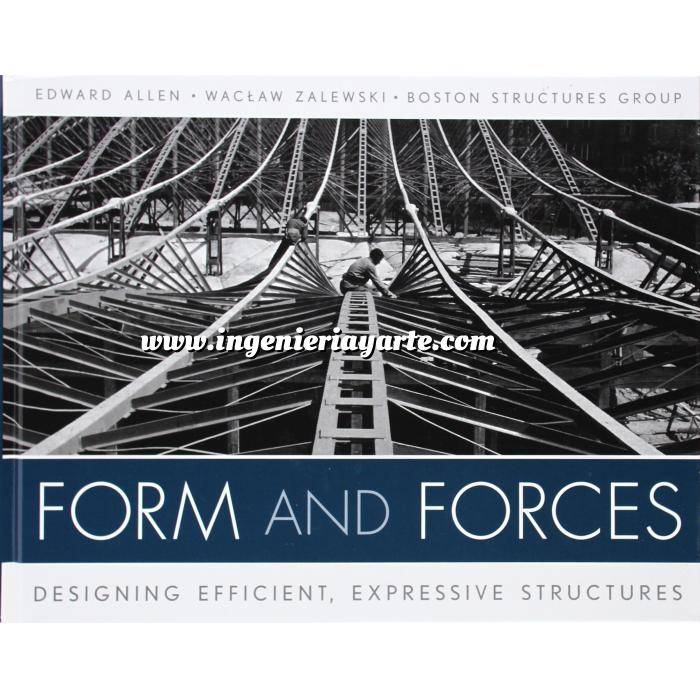 In Form and Forces,bestselling authors Edward Allen and Waclaw Zalewski offer a fresh,new approach to the study of structures for students and practitioners of architecture and structural engineering.

In Form and Forces,bestselling authors Edward Allen and Waclaw Zalewski offer a fresh,new approach to the study of structures for students and practitioners of architecture and structural engineering.

Emphasizing graphics rather than matematics and rote learning, Form and Forces teaches statics and strength of materials in the context of a set of projecs that involve students in the entire process of designing elegant,long-span structures,from concept generation to detailing and planning for construction.
Readers engage in such projects as a hanging roof for a transportation terminal,a concrete shell roof for a basketball arena,a wood truss roof for a summer camp activities building,cantilevered concrete shells to cover a stadium grandstand,and other fascinating,real-world designs. As they pursue these projects,students learn each fundamental structural design technique as it is needed,in the context in which it is useful,making it
easy to rememver and employ the principles discussed including:

Form and Forces equips the reader with simple,poweful tools employed by the great structural designers of the past 150 years- from Eiffel,Gaudi,and Maillart,to Schlaich and Calatrava-so that even beginners can design entire structures that are elegant and exciting

1 Designing a Series of Suspension Footbridges.

5 Designing a Building on a Vertical Site.

Various methods of analysis for multipanel trusses.
Common truss configurations and their uses.
Developing and refining the form of complex trusses based upon forces and connections.
Detailing and construction of a building with heavy timber trusses.

9 Master Lesson: Designing a Concrete Shell Roof for a Grandstand.

Tensile and compressive strategies of restraint to resist change of shape.
Effects of unbalanced loads on structures.

14 Master Lesson: Designing with the Flow of Forces.

15 Designing a Bay of Framing.

18 Bending Resistance in Beams of Any Shape.