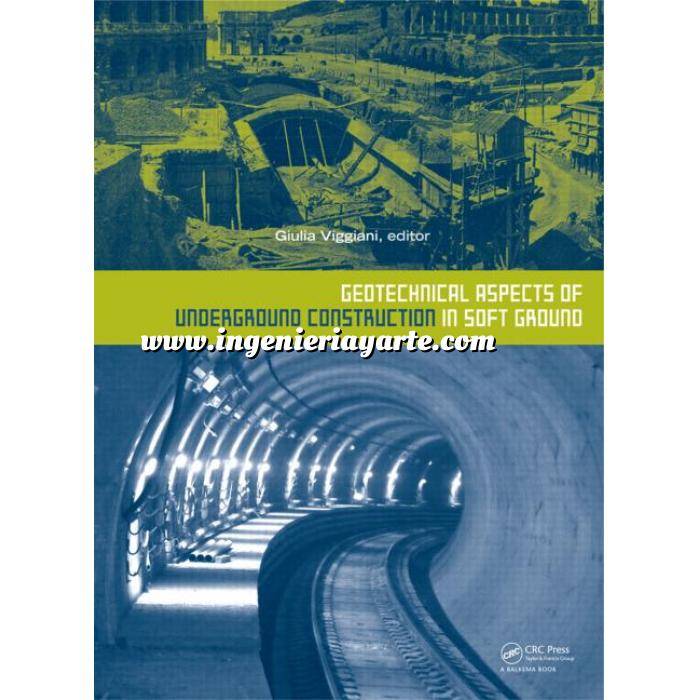 - Physical and numerical modelling of deep excavations and bored tunnels

The general reports give an overview of the papers listed in the symposiumâs technical sessions. The proceedings include the written version of the four invited lectures covering topics ranging from the geotechnical aspects of construction of the new Mexico City deep sewerage system (as a special contribution of TC214 âSoft Soilsâ), to the long-term settlement mechanisms of tunnels in Shanghai, the lessons learned from the deep excavations for the North-South Line in Amsterdam, and the evaluation of the effects of tunnel excavation on historical buildings, drawing on experience gathered during construction of subway line C in Rome.

Similar to previous editions, Geotechnical Aspects of Underground Construction in Soft Ground represents a valuable source of reference on the current practice of analysis, design, and construction of tunnels and deep excavations in soft ground. The book is particular aimed at academics and professionals interested in geotechnical and underground engineering.

Evaluating the effects of tunnelling on historical buildings: The example of a new subway in Rome

Numerical and physical modelling of tunnels and deep excavations

Application of the image and laser sensors based tunnel scanning system

Manipulations of the sticky clays regarding EPB tunnel driving

High-resolution multichannel seismic survey for the excavation of the new headrace tunnel for the Crevola Toce III hydropower scheme in the Ossola Valley, Italy

Design and construction of a sewer tunnel in difficult site conditions

Flow around a TBM: A Comparison of analytical and numerical models

Design of jet-grouting for tunnel waterproofing

Modelling a deep tunnel excavation in a low-porosity tectonised clay

Backcalculation of internal forces in the segmental lining of a tunnel: The experience of Line 1 in Naples

Modelling and monitoring of a urban underground excavation

The Line 3 of the Metro of Cairo

Methods of monitoring of metro lining in Prague

Two adjacent railway tunnels underneath the historic city of Mainz

Physical and numerical modelling of deep excavations and bored tunnels

Centrifuge modelling of the response of buildings to tunnelling

Tunnelling-induced deformation on a masonry structure: A numerical approach

An investigation into Inclined Struts method as a type of shoring

The efficiency of compensation grouting in sands

Influence of leakage on tunnel behavior in soft soils

The ground movement simulator: An interesting facility for the study of the behavior of buildings submitted to ground subsidence

Experimental and numerical study of grout injections in silty soils

A 3D numerical study of deep excavations in clayey soils

Effect of pressurized grouting on anchor behavior in residual soils

Recent uses of directional drilling technology in the construction field

Construction of a large underground parking in Bari downtown

Detection of imperfections in diaphragm walls with geophysical measurements

Geotechnical design of a railway tunnel and an underground station supporting the new city hall, Delft, The Netherlands

The construction of deep excavation ditch in weak soil in St. Petersburg

Design and construction of deep excavations in Shanghai

Effects of tunnelling on a single pile: Three-dimensional design tool

Prediction method of the displacement of surrounding ground during excavation

How to analyse walls for deep excavations

Strains and failure characteristics of pyroclastic materials in deep excavation

The influence of jet-grout constitutive modelling in excavation analyses

Pile-group response due to tunnelling

Deep excavation in Bulgariaâcomparison of measured and computed performance

Performance of deep excavations in the Taipei Basin

table in soft soils: Reliability of a simplified calculation model

Compensation grouting: Mechanisms determining the shape of the grout body

The response of buildings to tunnelling: A case study

The response of piled buildings to deep excavations

The response of buildings to movements induced by deep excavations

Mitigation of the effects induced by shallow tunneling in urban environment: The use of âcompensation groutingâ in the underground Line B1 works in Rome

On the effects of Line 6 tunnel excavation in Naples

A predictive exercise on the behaviour of tunnels under seismic actions

Reliability and Safety of Cable-Supported Bridges
110 €