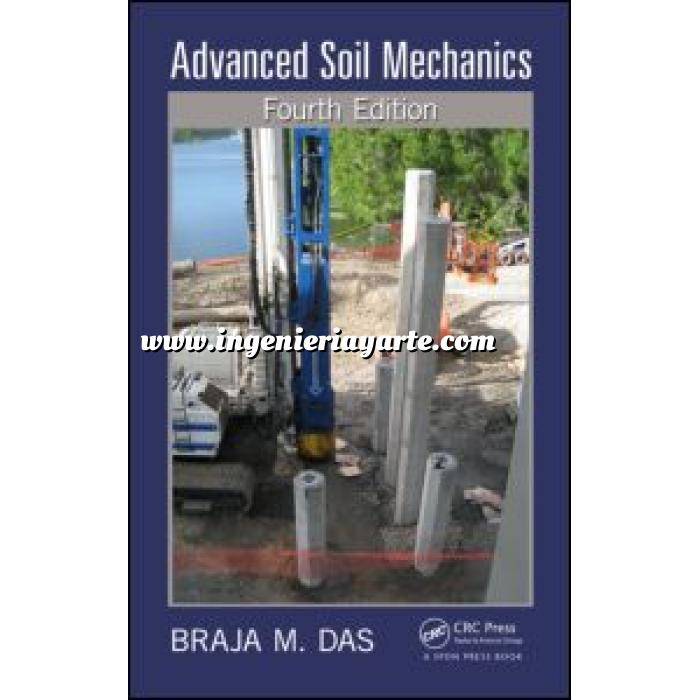 The fourth edition further examines the relationships between the maximum and minimum void ratios of granular soils and adds the American Association of State Highway and Transportation Officials (AASHTO) soil classification system. It summarizes soil compaction procedures and Proctor compaction tests. It introduces new sections on vertical stress due to a line load of finite length, vertical stress in Westergaard material due to point load, line load of finite length, circularly loaded area, and rectangularly loaded area. The text discusses the fundamental concepts of compaction of clay soil for the construction of clay liners in waste disposal sites as they relate to permeability and adds new empirical correlations for overconsolidation ratio and compression index for clay soils. It provides additional information on the components affecting friction angle of granular soils, drained failure envelopes, and secant residual friction angles of clay and clay shale.

The author adds new correlations between field vane shear strength, preconsolidation pressure, and overconsolidation ratio of clay soils. He also revises and expands information on elastic settlement of shallow foundations, adds a precompression with sand grains, and presents the parameters required for the calculation of stress at the interface of a three-layered flexible system.

An ideal resource for beginning graduate students, the fourth edition of Advanced Soil Mechanics further develops the basic concepts taught in undergraduate study by presenting a solid foundation of the fundamentals of soil mechanics.

This book is suitable for students taking an introductory graduate course, and it can also be used as a reference for practicing professionals.

Professor Braja Das served as dean of the college of engineering and computer science at California State University Sacramento, and is the author of several geotechnical engineering texts and reference books.

Nature of water in clay

Flocculation and dispersion of clay particles

Relationship between emax and emin

Equations of compatibility for three-dimensional problems

Stresses and displacements in a soil mass: Two-dimensional problems

Vertical line load on the surface

Vertical line load on the surface of a finite layer

Horizontal line load on the surface

Uniform vertical loading on an infinite strip on the surface

Uniform horizontal loading on an infinite strip on the surface

Triangular normal loading on an infinite strip on the surface

Vertical stress in a semi-infinite mass due to embankment loading

Stresses and displacements in a soil mass: Three-dimensional problems

Stresses due to a vertical point load on the surface

Deflection due to a concentrated point load at the surface

Horizontal point load on the surface

Vertical stress due to a line load of finite length

Vertical displacement due to uniformly loaded circular area at the surface

Vertical stress below a rectangular loaded area on the surface

Deflection due to a uniformly loaded flexible rectangular area

Stresses in a layered medium

Vertical stress at the interface of a three-layer flexible system

Vertical stress in Westergaard material due to a vertical point load

Reliability of stress calculation using the theory of elasticity

Determination of coefficient of permeability in the laboratory

Variation of coefficient of permeability for granular soils

Variation of coefficient of permeability for cohesive soils

Determination of coefficient of permeability in the field

Factors affecting the coefficient of permeability

Use of continuity equation for solution of simple flow problem

Hydraulic uplift force under a structure

Construction of flow nets for hydraulic structures on nonhomogeneous subsoils

Safety of hydraulic structures against piping

Plotting of phreatic line for seepage through earth dams

Entrance, discharge, and transfer conditions of line of seepage through earth dams

Effect of sample disturbance on the e versus log σ′ curve

Curvature of the failure envelope

General comments on the friction angle of granular soils

Modulus of elasticity and Poisson’s ratio from triaxial tests

Effect of rate of strain on the undrained shear strength

Effect of temperature on the undrained shear strength

Sensitivity and thixotropic characteristics of clays

Semi-empirical methods for settlement calculation of foundations on granular soil

Settlement derived from theory of elasticity

Reliability and Safety of Cable-Supported Bridges
110 €